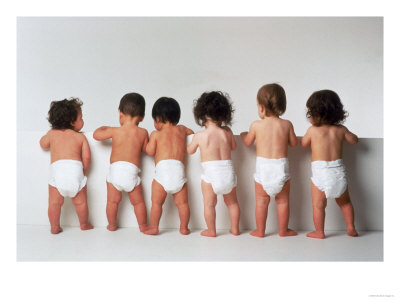 Tried potty training L earlier this week and it didn’t work out.But, he’s getting better at telling me after he pees/stinkies. So, L comes running up to me & goes, “I pee!” & begins to take his diaper off so that he can lay down and I can put the new diaper (he brought me) on. Well, as he is undoing it, he looks down & goes, “Uh oh! I stinky!” So, that added to the fun of changing him while he standing up.

Then, A comes running down the hallway before lunch & right behind him is a trail of his diaper falling out. We all know what it is–the little white stuff inside that absorbs all the pee. Yeah! That was down the hallway, on the couch, & all over the living room floor. Thus, the need to vacuum. I played a “mean” mommy joke & told L that he needed to pick up his toys because mommy needed to vacuum. I told him if he didn’t, then they were going to get vacuumed up. It worked! I always feel mean doing that but, it work sometimes.

Managed to get lunch made, while Z screamed at me a while. & all I could do was stand in the kitchen & talk sweet to him because I had to get the sandwiches made because mommy was already behind schedule–boys are usually asleep by 12 PM, not 1 PM. So, made the sandwiches (peanut butter & honey because we are out of Nutella & jam), after Z finished eating. Got the boys sitting down. Not even 5 minutes later L comes running over, saying he is all done eating. I look up a couple minutes later & A is passed out in his high chair. So, A is in bed now. Z is half sleeping, half fighting it every few minutes. & L is trying to entertain himself & yet play quietly because Z is sleeping some.

All that is left now is mommy’s lunch, a workout, shuffle the laundry, & some relaxing time–if I can get Z back to sleep & depending on how long A sleeps. Oh! & the BONUS: is going to be talking to R when he is on lunch break again. I love talking to my husband on his breaks, it makes the day go faster.

How did you potty train your kiddo? How do you get your kiddos to pick up? What are your kiddos favorite foods for lunch? What makes your day go by faster?