As I mentioned in the other post, we started the “No Spend Challenge” again.

Well, that statement may be a little false. Stayed up late again–I could breathe out of my nose last night, so I drank some Chamomile Tea with a splash of honey and watched some TV with Mr. while he feed our youngest, who was super fussy last night.

Mr. got tired pretty quickly, so we headed off to bed (which was actually rather late) and I woke up earlier than desired with Z, L and A. I turned on some cartoons and curled up in a blanket and closed my eyes. It was chilly and my eyeballs were burning. So, I dozed for a bit and before I knew it Mr. was up and ready to leave for work. I threw some pot roast in a bag with some other veggies and out the door he went. Or so I thought…

Mr. was back about 30 seconds later asking if I had left a light on, because our car wouldn’t start. Fail one for Mommy… The tailgate didn’t close all the way. So, it drained the car. Dead car battery. After hubby was home sick and a broken back window. What a week, folks. What a week!

So, the rest of the day included cartoons, leftovers and cuddles. I did some research for Christmas gifts, a scale and a handful of other stuff. But, it was a “do-nothing” kind of day.

We didn’t go out trick-or-treating, no pumpkin carving, crafts, costumes, etc. We sat at home and did nothing. We did have one group of three trick-or-treaters, but that was it. My bags of candy (which I thankfully paid very little for–via coupons).

I did make a couple costumes. But, I think they are crap quality compared to last year (even though last year I only had a day to do it). The boys didn’t like them after a bit and one of them go ripped, so we kind of decided nothing was going to happen–worked out since they were all kind of grumpy any way.

Here are last year’s costumes. It was just stuff we had on hand. I wish I had a picture of L’s Clutch Powers’ Costume. But, I don’t. So, here is our skunk and our Chipotle burrito. 🙂

I still can’t get over how stinkin’ cute our boys 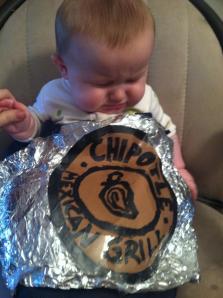 are! And how dang fast kiddos grow up! It’s insane!

Next year I hope to actually do a little more planning and do some better DIY costumes.

Tonight Mr informed me that he got a gift card from work and was going to give me the whole thing to go to lunch with a friend or to put to a sewing machine.

Man that guy is so sweet to me! I can’t believe I got so lucky.

So, next year, I will have a sewing machine, know how to use it and complete some better DIY outfits.

What did your kiddos go as? Feel free to share pictures below.

Hope you all had a wonderful evening! Time to go see if I can match Mr’s calorie workout.